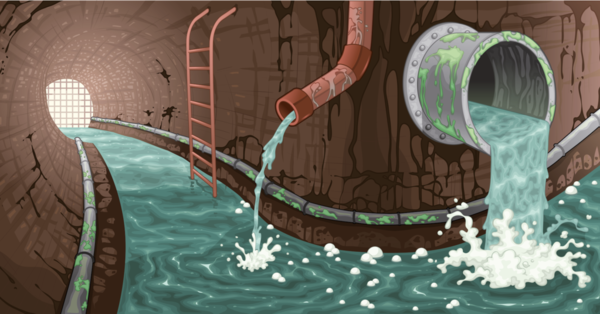 IAV, the engineering specialist from Berlin and Cyber Valley partner, has developed a concept that derives information about the spread of Covid-19 from the intelligent evaluation of publicly available data and results from the analysis of wastewater samples taken from the sewerage network. It is thus possible to pinpoint and detect sources of infection much faster and with greater precision. The next step consists in putting the concept to the test in a pilot project.

Dr. Matthias Pätsch, responsible for business development in the water sectoir at IAV: “It can easily take several weeks between the moment when someone becomes infected with the novel coronavirus, the occurrence of first symptoms, taking a swab, obtaining the test results and notifying the responsible authorities. In this time, the virus can continue to spread unnoticed. On the other hand, the pathogen RNA (ribonucleic acid) can be detected immediately in wastewater. If we collate and evaluate the data from wastewater tests with public test and infection data in an integrated way, infection waves can be detected earlier and localized with greater precision than was the case up to now.”

IAV’s concept for an early detection system is based on two developments: a tried-and-tested intelligent, cloud-based IoT platform for data synthesis and evaluation, and an AI method for intelligent positioning of devices in the sewerage system for automatic sampling (known as samplers).

In this project, IAV is cooperating with Berlin University of Technology (Department of Urban Water Management) and ORI Abwassertechnik GmbH, a leading manufacturer of automated samplers with remote data transfer for sewerage systems. Berlin University of Technology is responsible for taking and analyzing the samples, while ORI GmbH supplies the samplers and measuring equipment. IAV in turn provides the IT environment with responsibility for data analysis and evaluation, connecting the different dimensions of the whole project.

Matthias Kratzsch, President and CTO at IAV: “This is an outstanding example of how we at IAV transfer data management and AI know-how from automotive engineering to new areas of application, working at further development with excellent partners at our side, thus making a contribution to value creation.”

In strict compliance with the statutory data protection regulations, IAV’s IoT platform encompasses publicly available health data from the authorities and other public institutions together with the data from the interconnected samplers, with real-time evaluation of the data. The results are depicted on an individually scalable, topographic map.

Here is a highly simplified example: the pathogen RNA is found in a wastewater sample taken from one of Berlin’s sewage works. That means there must be a positive case in the connected wastewater network. In the next step, the samplers are positioned at the main wastewater collectors of the neighborhood or district with the statistically greatest probability for a hit, possibly because a large number of cases had been registered here during a first wave of infection. If the pathogen RNA is found in the sample that is now taken, the source of infection is narrowed down by taking further samples at points selected by AI in the affected neighborhood/district, reducing the focus, if possible, to a specific quarter or apartment block. If there are no positive findings, the corresponding district is excluded and the resources can then be focused on another district.

Dr. Matthias Pätsch explains: “Besides identifying the virus RNA, the main challenge is to decide where it makes sense to look for the RNA. A sewerage network has thousands of branches, each with constantly varying flow rates. The AI-based method produces meaningful results much faster, thus saving valuable time in detecting and localizing a new source of infection.”

The early detection system concept is currently in the implementation phase. The next step towards commercial application consists in putting the concept to the test in a pilot project with a town or county.

IAV with its more than 8,000 employees is one of the world’s leading engineering partners to the automotive industry. The company has been developing innovative concepts and technologies for future vehicles for more than 35 years, generating turnover of over € 1 billion in 2019. The client base includes all renowned automotive manufacturers and suppliers. Besides vehicle and powertrain development, IAV has been involved in electromobility and autonomous driving from an early stage and is today one of the leading engineering providers in these fields. Together with the Development Centers in Berlin, Gifhorn and Chemnitz/Stollberg, IAV also has other sites in Munich, Sindelfingen and Ingolstadt, in Europe, Asia and also North and South America.

About
Cyber Valley brings together international key players from science and industry to concentrate their research activities in the field of Artificial Intelligence. Supported through the State of Baden-Württemberg, the Cyber Valley partners will establish new research groups and professorships in the fields of machine learning, robotics, and computer vision in a new research center in the Stuttgart-Tübingen area in Germany. A key element of the project will be the training of up to 100 doctoral students.